Background
Moroccanoil Israel Ltd (MIL) successfully obtained injunctions restricting the sale of some of the supermarket chain Aldi’s lookalike products in the recent case of Moroccanoil Israel Ltd v Aldi Foods Pty Ltd [2017] FCA 823. Aldi’s conduct was found to be misleading and deceptive in relation to claims regarding the performance benefits of the argan oil used and natural content of the products.

MIL is considered a market leader in oil treatment products for hair. Under the brand name MOROCCANOIL, it markets and sells hair and beauty products containing oil extracted from the nut of the argan tree, a tree native to Morocco, reputedly rich in antioxidants, fatty acids and vitamin E. In 2012, Aldi launched a range of hair care products using the terms ‘Moroccan Argan Oil’, among other brands. MIL commenced proceedings against Aldi, alleging trade mark infringement, passing off, as well as a breach of Australian Consumer Law (ACL). Shown below is a side-by-side comparison of selected MIL and Aldi products. 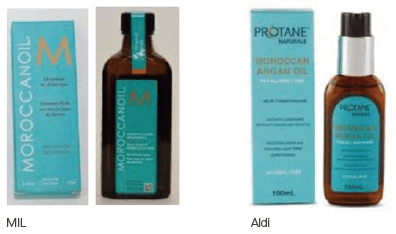 Trade mark infringement findings
MIL is the proprietor of the following two trade marks registered in relation to a range of goods including hair care products.

No limitation as to the colours turquoise, orange and white was recorded in the Register. A trade mark registered without colour limitations is taken to be registered for all colours and therefore, the question of colour was found not to be relevant.

The Court held that ‘Moroccan Argan Oil’ as used on the Aldi products was not deceptively similar to either trade mark, taking into account that MIL’s trade marks were composite marks and included ‘Moroccanoil’ as well as a capital ‘M’ letter as prominent features. Aldi’s products did not feature the capital ‘M’ letter.

According to the Court, ‘Moroccan Argan Oil’ was used as a badge of origin on Aldi’s products, and together with other trade marks such as Protane Naturals, there was no real, tangible danger that an ordinary or reasonable consumer with an imperfect recollection of the marks or the name ‘Moroccanoil’, would wonder whether the Aldi products were associated with MIL’s marks.

Findings on passing off and contravention of Australian Consumer Law
In relation to the passing off claim, the Court accepted that MIL had a substantial and valuable reputation and that Aldi had modelled the get up of some of its products on MIL’s get up, and sought to appropriate some of the reputation of MIL’s products to its own benefit.

However, that was not sufficient in itself for a finding of misleading or deceptive conduct. The Court noted differences which were held to sufficiently distinguish Aldi’s products, such as the presence of house brands, the lack of the prominent capital ‘M’ letter, and the fact that Aldi never used the text ‘Moroccan Argan Oil’ vertically.

The Court also took into account the fact that MIL’s products are marketed as a ‘salon only’ brand at trade fairs and in fashion magazines, whereas Aldi’s products are sold in the supermarket chain. It also noted that there was vast disparity in the prices at which the respective products are sold.

Findings on ‘naturals’ and performance representations
The Court agreed that the use of the word ‘naturals’, on the Protane Naturals Moroccan Argan Oil products and packaging represented that they were made, either wholly or substantially from natural ingredients.

However, the decision emphasised the very small percentage of ‘natural’ ingredients (they were mainly synthetic) apart from water, such that they were not substantially made up of natural ingredients. In the circumstances, the Court found that it was misleading and deceptive for Aldi to call its product range ‘naturals’.

Conclusion
The case provides an interesting insight into Aldi’s business practices and its marketing strategy as described in their slogan ‘Like Brands. Only cheaper’. In the present instance, sufficient differences were identified between the respective products to avoid trade mark infringement or passing off. Aldi was still required to stop selling the goods because of the potential for consumers to be misled by the ‘natural’ claim and product performance representations. The decision is presently subject to an appeal. 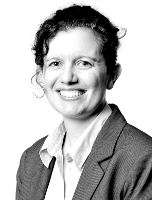 Prior to immigrating to Australia, Marine worked in the intellectual property (IP) department of French car manufacturer, Renault, and at a patent and trade marks attorney firm based in Paris. Marine also gained valuable experience in anti-counterfeiting as an in-house lawyer for the French anti-counterfeiting group, Union Des Fabricants (Unifab). There, she represented several member companies in Customs proceedings, and lobbied at the national and international level in favour of better protection of IP rights. Marine participated in working groups such as Interpol Intellectual Property Crime Action Group and Global Anti Counterfeiting Group.