The Federal Court judgment, handed down on 30 July 2021, recognised an AI machine (DABUS) as an ‘inventor’ on Australian patent application 2019363177 and received widespread media attention. .

As we reported earlier, Australian application no. 2019363177 naming DABUS as the sole inventor is one of a family of related applications around the world. The applicant and creator of DABUS, Dr Stephen Thaler, has been actively campaigning for AI to be recognized as an inventor. In a number of jurisdictions including the US, UK and Europe, counterpart applications have been rejected on the basis that DABUS is not a natural person and therefore cannot be named as an inventor. The judgement therefore places Australia as the first country to judicially accept AI as an inventor.

In the words of Justice Beach, we are both created and create, why cannot our own creations also create? With this sentiment, his Honour noted that the word “inventor” is not defined in the Patents Act or Regulations, and according to its ordinary meaning, should be regarded as an agent noun similar to “computer”, “controller”, “regulator”, “distributor”, “collector”, “lawnmower” and “dishwasher”, in which the agent can be a person or a thing.[1] Justice Beach was of the view that this broad and flexible interpretation was consistent with the object of the Patents Act to promote technology innovation, and the flexible interpretation given to “manner of manufacture” as defined in the Statute of Monopolies[2].

The decision is likely to have implications for the assessment of inventive step. According to Justice Beach, the ‘person skilled in the relevant art’ can be taken to be assisted by or have access to artificial intelligence, potentially raising the threshold for inventiveness. However, the question of whether the hypothetical person skilled in the art could be an AI machine remains open to debate.

Justice Beach also rejected the Commissioner’s analogy between ‘inventor’ in the Patents Act and copyright law which requires a human author. Notably, the decision does not discuss any analogy between ‘inventor’ in the Patents Act and ‘designer’ in the Designs Act. Registered designs protect the visual appearance of a product and, like patents, provide IP owners with a limited time monopoly to incentivise innovation. The invention described in Australian application no. 2019363177 relating to a food or beverage container with a unique wall profile could certainly be considered a registrable design. Interestingly, Section 13 of the Designs Act 2003 specifically refers to the designer as ‘the person who created the design’. It would be a strange outcome if DABUS could be considered the inventor of a container for a patent application but couldn’t be considered a designer for the same container in a design application.

We eagerly await the decision from the Full Federal Court. 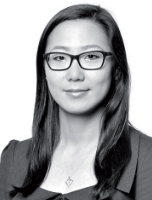 Helen joined the intellectual property profession in 2009 because of her passion for innovation and cutting-edge technology. Since then, Helen has successfully obtained patents, trade marks and designs for many businesses in Australia and overseas in a large number of technology areas including machine learning and image classification, second-life battery systems, automation, smart devices, medical apparatus, manufacturing processes and equipment, subsea mining technology, automotive technology, audio signal processing, embedded software, and control systems. Helen is experienced in drafting patent specifications, prosecuting patent application in Australia and overseas, providing infringement and validity opinions, conducting searches and providing general IP advice. Since joining Phillips Ormonde Fitzpatrick in 2017, Helen has developed a further specialisation in artificial intelligence and software patents. In 2019, Helen completed AI Programming with Python, a future skills course from Royal Melbourne Institute of Technology, where she gained hands on experience building an image classifier using convolutional neural networks, which enabled her to further develop her understanding and appreciation for AI and Machine Learning algorithms.