Business is all about relationships, as they say, and as the decision in Watson v Cosmetic Warriors[1] has shown, relationships can impact how a business can defend its trade mark in a non-use removal action.

The trade mark registration the subject of this case is 607740 LUSH in respect of class 25 ‘Clothing, footwear and headgear’ in the name of Austin John Watson as trustee for The Watson Family Trust.

Under s 92(4)(b) of the Act, Mr Watson had the onus to prove use of the mark LUSH in relation to the class 25 goods in Australia within the relevant period from 22 April 2015 and 22 April 2018 to rebut the removal application by Cosmetic Warriors Limited (CWL).

The Registrar decided against Mr Watson on the basis that there was insufficient evidence to prove use and that there were no factors favouring the exercise of discretion not to remove the trade mark registration.

Since 1981, Mr Watson had been carrying on a ‘one man brand’ business of the retail sale of clothing through and under various entities and trading names, which he called ‘alter egos’, most relevantly, HDFO Pty Ltd (HDFOPL) which was later taken over by HD Brands Pty Ltd (HDBPL). Mr Watson had never conducted business under the name LUSH. However, he gave evidence that he had sold garments having a label bearing the mark LUSH. The following example was provided in the case: 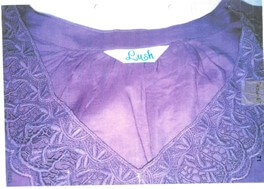 As evidence, Mr Watson relied upon three transactions concerning the acquisition of a total of 98,796 garments from a supplier, A B Global Inc (Global), as well as oral evidence given by a proprietor of Global, whom Mr Watson had a business relationship with for 23 years, and an employee at the various retail clothing stores operated by Mr Watson of about 8 years, that the garments traded bore the LUSH label.

Mr Watson was unable to provide any written records of sales of the garments by reference to the mark LUSH. As he stated in oral evidence: ‘the volumes are so big, you can’t keep a record of – and the prices are small [and thus] it’s all about volume [so] it’s not feasible to keep records of every style, every brand [because] it’s all about the price’.

While the evidence of the three transactions fell short and Mr Watson was unable to provide any other evidence of written records, Greenwood J accepted and was satisfied that the two witnesses’ oral evidence were sufficient to bring Mr Watson over the line to prove use under s 92(4)(b) of the Act.

Lastly, Greenwood J was satisfied that use by Mr Watson’s companies, HDFOPL and later HDBPL, was authorised use as Mr Watson retained authority and was the ‘guiding mind’ over these companies ‘at all material times’, attended ‘personally to all operations of the Business’ and had given a licence ‘subject to [his] absolute control of the use of the trade mark’.

Traditionally, documentary proof, even if it may be just 1 invoice, is required to prove use. However, this case highlights the relevance and probative value of oral evidence, particularly if given by long-term business partners. It is also unclear to what extent the Federal Court accepted and was satisfied with the oral evidence in these particular circumstances where the business is a small retail clothing store whose ‘point of sales system is not sophisticated’. Nevertheless, this case appears helpful to businesses like Mr Watson’s involved in a non-use removal action that may not keep sophisticated written records as they may be able to rely upon the words of their employees and business partners to defend their trade mark.