Home Inspired - The POF blogReading the fine print: When will refurbished…

Businesses that purchase Australian patented goods are free to use them in any manner desired unless the patentee imposes conditions at the time of sale. However, does this still apply when the purchased goods are modified in the course of refurbishment and resold? This issue was recently considered by the Federal Court in the patent infringement decision of Seiko Epson Corporation v Calidad Pty Ltd [2017] FCA1403.

Seiko is a Japanese company that manufactures and sells Epson branded printer cartridges, the features of which are protected by Australian Patent Nos. 2009233643 and 2013219239. Ninestar Image (Malaysia) SDN BHD, a third party to the proceedings, acquires used or discarded Epson cartridges and refills them with ink overseas for subsequent sale to Calidad,who imports and sells them into Australia. In the course of refurbishment, Ninestar makes modifications to the cartridges that enable use with Epson branded printers.

There was no dispute that the cartridges imported and sold by Calidad into Australia fell within the scope of at least some of the claims of Seiko’s patents.

Control of patented products after sale

In this decision, the Court upheld the legal principle in National Phonograph Co of Australia Ltd v Menck [1911] 12 CLR 15 (Privy Council) – that the rights of owners to use products embodying an invention are protected by an implied licence unless conditions are imposed by the patentee at the time of sale.

Seiko contended that such implied licenses do not travel with patented goods that have been discarded by their owners. The Court disagreed noting that National Phonograph v Menck supports the principle that subsequent owners may assume that they acquire the patented goods without limitation, and that a full licence has been given.

The Court ruled that Calidad was the beneficiary of an implied licence of the type recognised in National Phonograph v Menck because the Epson cartridges were sold without restriction. Importantly, this was regardless of the fact that the patented goods were first sold outside of Australia.

Accordingly, the relevant question becomes not whether the refurbishment is an infringement, but “… at what point has an owner of the embodiment made changes to it such that the implied licence arising from a sale sub modo is extinguished?”.

Since no authority had directly addressed this topic, the Court developed a new test for considering this question, namely:

“… whether the product, insofar as it is an embodiment of the invention as claimed, was materially altered, such that the implied licence can no longer sensibly be said to apply.”

The Court held that this involved a factual inquiry of the significance of the modification work done on a product and how the modifications in question relate to the features of the patented product that are defined by the claim.

There were nine categories of Calidad products that were said to allegedly infringe Seiko’s patents.

Some of the modifications included electronically resetting the memory chips or other physical modifications of the cartridges. The Court found that there was no ‘material alteration’ of these products meaning that the implied licence was not extinguished.

Other modifications included physically replacing the memory chip on the cartridges. The Court held that removing and/or replacing a component of the product that is a feature of the invention as claimed may be a material alteration that would extinguish the implied licence, and result in patent infringement.

An implied licence is conferred upon the sale of patented products that allows unrestricted use by purchasers and subsequent owners, unless the Patentee imposes conditions at the time of purchase. The implied licence can continue, even when the patented goods are modified and resold as long as the refurbished goods are not a material alteration of the original product as an embodiment of the invention. 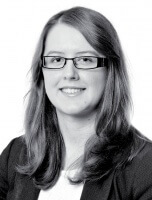 Michelle has a background in biomedical science and a master’s degree specialising in biomedical engineering. During her undergraduate study, Michelle completed an internship at the Ludwig Institute for Cancer Research investigating colorectal cancer protein mutations in the Wnt signalling pathway. Her master’s project was completed with the Bionics Institute, focusing on automated processing of histological images to assess neuron viability. After completing her studies, Michelle held a position as a Biomedical Engineer at St Vincent’s Hospital Melbourne.