The Trans-Tasman IP Attorneys Board has today released a new Code of Conduct for Trans-Tasman Patent and Trade Marks Attorneys 2018, together with Guidelines to the Code of Conduct 2018.  These changes have the potential to impact a number of patent attorney firms that are now listed on the Australian Stock Exchange.

One of the limbs of the March 2013 arrangement between the governments of Australia and New Zealand was that the existing Code of Conduct for patent and trade marks attorneys be reviewed. In March 2017, the newly formed Trans-Tasman IP Attorneys Board commenced revising the provisions of the existing Code to accommodate the introduction of the Trans-Tasman regime and to address conflict concerns arising from the new business model of publicly listed companies acquiring, and operating in a group, multiple Australian patent attorney firms (and now New Zealand firms).

From 23 February 2018, Australian patent attorney firms must  inform domestic and foreign clients whether they are operating as an incorporated company and, if they are, whether the company is public or private. If they are a member of a commonly owned group of firms, such as being owned by a publically listed holding company, the group members must also inform their domestic and foreign clients, and the public, of that fact and also of the identity of all other members of the group.

By way of reminder, the publicly listed firms in Australia are: 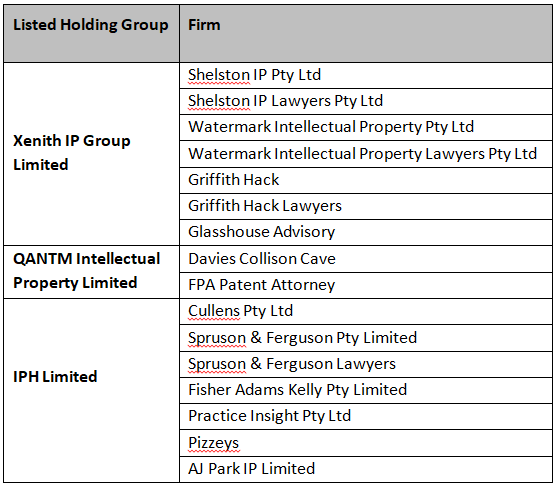 On the conflict issue, the new Code makes it clear that an attorney is in a fiduciary relationship with a client and owes the client a duty of loyalty, confirming that the attorney must not prefer the attorney’s own interest over the interest of a client.

The members of a group of commonly owned firms are to be regarded as having a single body of clients, meaning that the potential for conflict must be considered both across those firms and within those firms, unless the firms are “operating independently”. The Guidelines explain that “client facing” attorney professional services such as the provision of advice and the prosecution of applications, should not be provided by staff common to multiple firms if those firms want to remain as independent operations, and thus avoid cross-firm conflicts. Also, the use of a common database where attorneys from  one firm can access client confidential information of another firm should be avoided in order to remain as independent operations.

Phillips Ormonde Fitzpatrick remains proudly independent and privately owned.  If you have any questions about the changes please contact us.