Across the world, individuals, companies and firms have been celebrating women’s achievements as part of International Women’s Day, and Women’s History Month. While there is no doubt that women have made their mark and proven their success in many sectors, there are some interesting insights surrounding the contribution and practice perspectives of women in intellectual property.

According to the WIPO Magazine, while “there are now few deterrents to female inventors and creators”, “women are conspicuously absent in every aspect of the patent system”. The lower number of female patent practitioners and female applicants across different jurisdictions or technical areas are only some of the statistically simpler evidences of an existing gender gap in the Intellectual property space. Despite the strong presence and steadily rising number of women in STEM, fewer women participate in protecting their research in the form of patent applications compared to their male counterparts, and even fewer take part in commercializing their ideas. The cause of this is attributed to the exclusion of women from networking opportunities when compared to men, as well as the fleeting consideration given to female innovators by funding bodies.[1]

A report on “The gender patenting gap” published in 2016 suggests that women would not achieve parity in patenting until 2092, if progressing at the current rate.[2] Several studies show factors such as work-place biases, pay and promotion-related issues, and a lack of role models and mentors being a deterrent to women continuing their careers in STEM fields.[3]

Looking at women in the IP profession, IPTA’s bulletin released this month included a section on their membership statistics which shows that while the female to male ratio is much lower in age group above 40, there is a similar number of female and male members below 40. This indicates a promising future for a better gender-balanced IP practice.

With the current boom in networking opportunities available to women, and with organizations working hard towards a gender-balanced workplace in several countries, achieving a better gender balance in the innovation and IP practice space is very possible. Collective action and support is the key to building a more balanced workplace for women inventors. 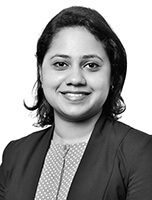 Intellectual property being a dynamic and interesting cross-over between science and technology, law and business is what brought Ann’s attention and interest to this field. Ann did her Master of Telecommunications Engineering (Honours) from the University of Melbourne after completing a Bachelor of Technology in Electronics and Communication from Mahatma Gandhi University, India.