Home Inspired - The POF blogIP NewsInterlocutory relief for a ‘one trick pony’:…

In Dincel Construction System Pty Limited v AFS Systems Pty Ltd [2017] FCA 262, the Federal Court granted interlocutory relief to a company with a single product (a so-called ‘one trick pony’) against one of the CSR group of companies. The injunction prevented AFS from marketing or selling its potentially infringing product, pending the outcome of a patent infringement action. The decision highlights the broad range of competing considerations weighed up by the court when assessing requests for injunctive relief.

In this case, the court found that Dincel, with its single product offering, was at risk of harm beyond what would be compensated through the damages available in successful infringement actions. The decision also clarified the factors relevant to the court when considering requests for an interlocutory injunction.

2. Is there a prima facie infringement case?

Requests for an interlocutory injunction are typically made shortly after the potential infringement has come to light. Hence, there is usually insufficient time to fully prepare the expert evidence and legal submissions needed to properly determine that the patent has been infringed, or whether the patent is invalid. The court recognises this, but must still make a preliminary assessment of the strength of each party’s case. From the evidence available, it is necessary to decide whether a serious question of infringement exists, without making any final conclusions on infringement or invalidity.

In this case, the patent related to hollow panels that snap-lock together to provide formwork for concrete on construction sites. The hollow panels are snap-locked together in the desired configuration and wet concrete poured into the hollow interior. The invention claimed in the patent was directed to the features of the snap-locking connection between the panels. These snap-lock features are illustrated in Figures 1 and 7 of the patent shown below. 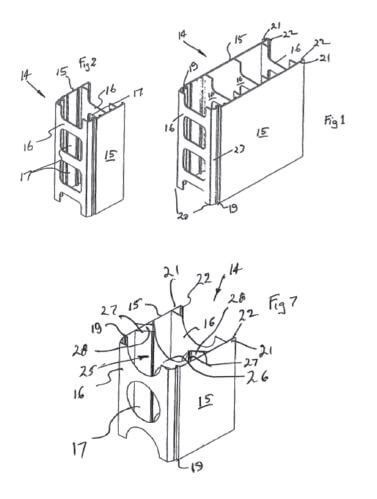 One side of each panel 15 has a pair of spaced flanges 21, each with an inwardly directed lip 22. The opposing side of each panel 15 has a corresponding pair of ramp surfaces 23 leading to a pair of grooves 19. To connect the panels, the ramp surfaces 23 of one panel are forced between the flanges 21 of the other panel. The ramps flex the flanges 21 outwards until the lips 22 resiliently ‘snap’ into the grooves 19. The patent defined this aspect of the panels as:

Below is an end view of the AFS formwork. Dincel argued that the rounded ends of the outer edges are ramp surfaces that lead to respective grooves. The inwardly directed flanges of the other panel are moved by the ramp surfaces until they snap lock into the grooves.

AFS argued that the ordinary meaning of ‘a ramp’ is an inclined surface or plane extending from one level or position to another, and therefore the term does not encompass the rounded outer edge of the groove. 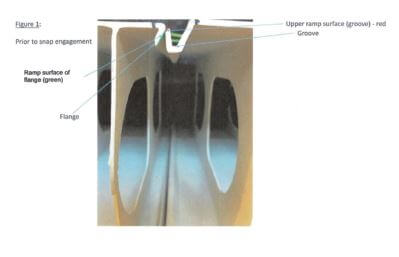 Nicholas J gave no indication as to which interpretation of ‘ramp surface’ was preferred, but simply held that Dincel’s interpretation was ‘plausible’. As such, the threshold requirement for a prima facie infringement case was met, with Nicholas J finding that ‘Dincel’s infringement case is certainly not strong, but nor would I describe it as weak’.

2. Would an award of damages fail to compensate Dincel?

Dincel’s only product is its snap locking formwork panels (apart from a few associated accessories). Thus, Nicholas J characterised the Dincel business as a ‘one trick pony’. AFS had not yet released its new wall panel product but Nicholas J accepted that AFS planned to undercut Dincel’s pricing and provide fast and free delivery.

In light of this, the release of the AFS wall panel product would not only result in lost revenue for Dincel, but also cause harm that would be very difficult to quantify. In particular, Nicholas J referred to Dincel’s submissions that they would need to terminate skilled and experienced employees in the face of substantially lower revenue. The detrimental impact of such loss cannot be precisely calculated, and is not normally considered when determining an award of damages. It followed that there was sufficient risk that any award of damages would not properly compensate the harm to Dincel.

3. Any other factors that would tip the ‘balance of convenience’?

In contrast to Dincel, AFS is part of the CSR group of companies. It has an established range of products, one of which – ‘Rediwall’ – is a formwork wall panel that AFS hope to replace with the new wall panel product. The new product is not yet released, so the disruption to AFS in delaying the release is minimal, particularly as the existing Rediwall panel can be offered as a substitute.

Overall, the court found that Dincel had a compelling case for injunctive relief, and the impact of an injunction on AFS was relatively minor. Dincel’s request for an interlocutory injunction was granted and AFS restrained from marketing and selling its proposed wall panel pending resolution of the infringement proceedings.

Interlocutory injunctions in patent infringement cases are the exception, not the rule. However, this decision shows the court is willing to consider a broad range of real world issues facing businesses, including those that cannot be monetised but nonetheless flow through to the ‘bottom line’. Those contemplating formal patent proceedings should bear in mind interlocutory relief may be an option, and the court weighs up all circumstances, including the non-quantifiable market realities in which a business operates. 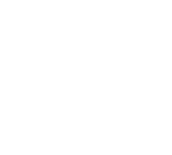 Ken is a member of POF’s Engineering team, working from our Sydney office. With more than 20 years’ experience in the intellectual property industry, Ken has previously worked in private practice and as an in-house attorney for one of Australia’s most prolific research and development companies. He has also spent several years as a Patent Examiner at IP Australia which gives him detailed insights into the many practical aspect of the patent application process. This varied experience has provided Ken with exposure to a broad range of technologies and gives him a unique view of the entire patent process.