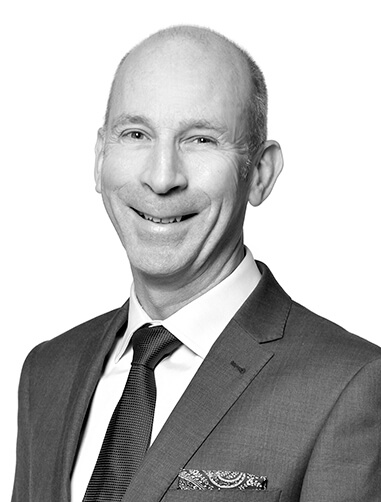 Ross began his professional career as a Technical Assistant with Phillips Ormonde Fitzpatrick (POF) in 1987. In 1991, he moved to Europe where he worked with The Swatch Group in Switzerland as an in-house patent attorney. After returning to Australia in the late 90s, Ross worked as a patent and trademarks attorney before re-joining POF as a Principal in 2006.

Ross has considerable expertise in patent drafting, prosecution, infringement and opposition work. He specialises in patenting all aspects of electronics, communications, software, IT, optics and microelectromechanical structures in a wide variety of industries.

Appointed as Managing Principal in 2016, Ross now leads his team in the development and delivery of business initiatives to best achieve the POF Group’s Strategic Objectives. Commercially minded with a client centric outlook, Ross is focused upon ensuring POF is the IP partner for business success.

Shortlisted as a finalist in the IP Category of the Lawyers Weekly Partner of the Year (Australia) Awards in both 2016 and 2018, Ross has also been named as an IP Star in the 2020 Managing Intellectual Property IP Stars Handbook. He is an active member of IPTA, FICPI and AIPPI.

Ross has been recognised as a leading practitioner in the 2020 IAM Patent 1000.

The first time we really paid attention to COVID-19 was in early February this year. By mid-March, we had set-up a COVID-19 Response Team including our heads of IT and People & Development, reviewed our readiness to have everyone working from home, run a successful IT stress test with 40% of our people working from …
>> Read more
Key points: It’s business as usual at Phillips Ormonde Fitzpatrick. IP Australia has introduced a new streamlined process for extension of time requests for Applicants impacted by COVID-19. We will keep you updated. We continue to monitor this situation closely and want to provide you with a business update and share some of the things we …
>> Read more